On the night of the 23rd of December 1982, a police control room in southern India received a distress call from a woman who only said that she was calling from Redwood trail. Inspector Sarah Joseph was asked to find out what was happening at Redwood trail apartments. Sarah and assistant Issac "Ice"  Hamilton turned their patrol vehicle towards terrence road where the apartments was located. What happened from then on formed the script of a story. One that was written by fate and guided by destiny.

"Aaron" Purva said softly, "Stand up slowly baby". Her voice was filled with fear but masked with confidence. She slowly put her hand out so that the 5 year old could grab on to it. "Aaron. Hold my hand" she said again and stretched her hand out a little more from around the ledge. He stood up, unsteadily. His tender fingers trying to get a hold of any support the brick wall behind him could provide. He took a step towards the voice of his caretaker, unaware that a thread from his dress had
gotten stuck on a nail in the wall behind him. "Aaron. Come here slowly, baby" she said, stretching her hand as far as she possibly could. She was sweating bullets and her legs were trembling. A gentle winter breeze sailed through the window . Her heart was now beating faster than ever. But she had to remain calm. Aaron shouldn't see that she's afraid. That's what the man from the fire department had told her. They'd be arriving soon but she had to make sure the baby was in her sight.
Another breeze entered the house. Momentarily, she withdrew one of her hands to wipe off the sweat on her eyelashes. Instantly, she reached out again. "Aaron, Baby. Come to vapa." she said, reassuringly.She looked out into the vast expanse of the city landscape, hoping to see a fire truck on its way. Aaron took another step forward. The thread loosened from his dress. He took another step, shakily. "Slowly baby. Slowly". In his excitement of hearing his vapa's voice get closer, Aaron giggled and clapped his hands, not knowing that he was standing on a 3foot wide landing, seventeen floors above the ground. Clapping happily, he tried taking another step and lost balance and sat down again. Purva's heart jumped into her hands. "Stay there baby. Vapa can see you. Stay there". He heard her voice and giggled and clapped his hands in joy again and tried standing up. The thread was now stretched to its limit. He stood up and turned, the thread put him off balance and tugged him back.He lost balance again and slipped.

"AARON!!!!!!", she wailed. Her eyes were frozen in shock. Her face, white. Her hands and feet, paralysed. She coudln't react.

A little while later..

"Are you absolutely sure?" Inspector Sarah asked her assistant Isaac, bewildered.
"Positive." he replied.
"How's Purva doing?"she enquired.
"She's inside. Depressed and traumatised. We should get a psychiatrist here ASAP" he said.
"How many people did you talk to?"
"27. That's everyone on this side of the building" he said, pointing to the side facing the balcony they were standing in.
"Who called the police?"
"Control room said it was an anonymous call from a woman but the residents say that it wasn't one of them. Must've been Purva herself" Isaac answered.
"And nobody saw or heard anything other than her screaming?" she asked, amused.
"SJ. There is no body. There's no blood. No crime scene, no witnesses. Just a depressed complaintant. What are we even investigating here?" Isaac asked, trying to convince Sarah that there was no case.
"Where did the baby go, Ice? We have to find him. There's no way Purva will recover from whatever it is she is suffering from without finding Aaron."
"There wasn't a baby Sarah. Nobody around here has seen a baby in this house or with her. She was probably hallucinating. I've called the medical team, they're bringing some help for Purva. Let's get out of here"

"Alright. Wait in the car. I need to talk to her again. I won't be long" Sarah said, not convinced by the overwhelming evidence.

She walked into the room where Purva was sitting, wrapped in a blanket with a mug of coffee in her hand, staring at the wall opposite her.
"Purva..Who was Aaron?"she asked.
Purva said nothing.
"Did you call the police, Purva?"
Sarah walked closer and put her hand on Purva's drooping shoulder."Purva..I need you to talk to.." she stopped her sentence midway as Purva fell to the ground.
"Jesus Christ.No way" she murmured and sat on her knees next to Purva and checked her pulse. There wasn't one.
She reached into her jacket to get her phone but she'd left it in the car. She ran to the balcony and looked down. Isaac was in the car.
"ICE! ISAAC!! ISAAAC" she shouted at the top of her voice. He couldn't hear her. She looked around for something she could throw at the car to get his attention.

Unable to find anything, she took off her shoe and used that.
Isaac jumped out of the car, startled and looked up. Sarah was waving frantically at him to come up.

Sarah was waiting at near the elevator for him. She told him what had happened as they walked back into the house.
"She just fell. Dropped dead. Something is wrong here ice. I just kn.." she stopped midway through her sentence again and put her hands over her mouth in disbelief.
There was a knife through Purva's stomach.
Isaac instinctively took his service revolver out of its holster and searched the house for the culprit. Sarah coudln't believe what she'd just seen. She looked around the room to check if someone was hiding there. She found the windows locked. So were the cupboards. "This room's clear" she shouted,to let Isaac know and then looked around for some clues.
Isaac came back in the room looking stupefied.
"There's nobody here"

Have you seen it rain? 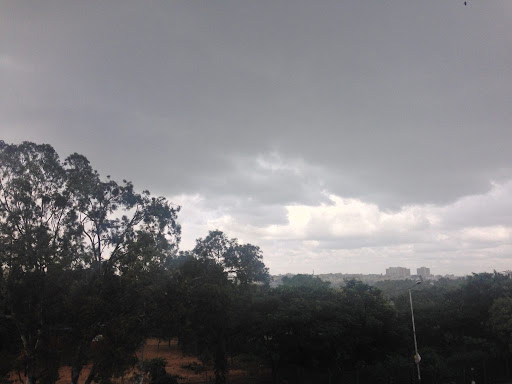 Have you seen it rain? I mean really rain. I mean the kind that starts with some grandfatherly clouds with their grey hair and cloudy beard moving overhead at the kind of pace that only grandparents move? They’re not slow, strictly speaking. They look like immovable objects who’d really rather not be moved. Those clouds. The kind that grow bigger and darker by the time you’ve made some tea to enjoy by the window. They’re not bursting at the seams quite yet. They’re biding their time. Just hanging out and watching the baby sparrows learning to fly and the humans below scurrying around to find shelter before the downpour. The only ones who aren’t, are some kids playing football. The sparrows aren’t retreating just yet either. The breeze is now a little more brisk than a moment ago. It’s brought with it that familiar petrichor which makes me want to step outside and raise my face to the clouds, arms outstretched like we used to as kids. Someone in my house is yelling (at me?) to get the
click to keep reading>>

On judging a book and its cover 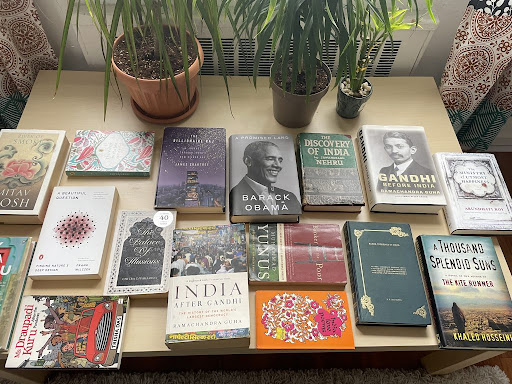 Earlier this year I had grand plans, like most of us did, of what I’d do with all this extra time I’d have from not having to commute to and from work since we’d all gone remote. It’s fair to say that in hindsight, that was a naive of me. As we’ve all found out, sitting home in isolation is actually far from a relaxing activity. Especially when the world outside is on fire and we start to recede into our own minds. Ideally, I would’ve read a few dozens books in this time (and I’m sure some people have, kudos to you). In reality, what i have managed to do is to read a few pages of several books and almost never finishing any one of them.  This morning, I felt like I was in the mood to read something. So I picked up a book that had only recently arrived. President Obama’s A Promised Land. (I’m only 30 pages into this one too so we’ll see how long this lasts). This book’s cover is rather minimal. It features a greyscale portrait of the president, his name and the title of the book in some
click to keep reading>>

21 days for each other By the time I post this, India would've started day 1 of a 21 day curfew. It's an insane idea which will not just inconvenience a lot of people but also throw lives into disarray. The economics of it is of course terrible but the human costs are much more severe. Lots of people will be out of jobs, out of their homes, hungry and unable to access basic resources. We will hear heartbreaking stories about people who are beaten up by the cops for no real reason. We will hear about the ridiculous lack of capacity at government hospitals. There's no denying that for the foreseeable future, we are going to hurt just as the rest of the world has. There is nothing "right" about this decision to confine people to their homes and, in many cases, to the streets. And now imagine all those exact same consequences for all of those people but with the additional burden of a virus that, as of today, has no cure or vaccine. India is an unenviable situation. But we're at that s
click to keep reading>>